… was a single if statement! 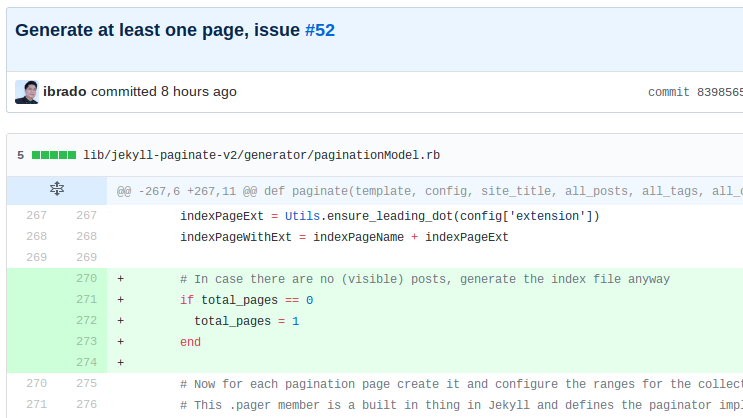 Yesterday, I reported a bug I encountered in the jekyll-paginate-v2 plugin that I use on this site, where it would not generate the first page (index.html) if there were no posts. This resulted in 404 (Not found) errors on GitLab Pages, which lead me to believe that I had royally screwed up my hosting configuration.

After a few minutes, I managed to find out where the problem was, and thus my first-ever lines of Ruby were born. Since I’ve a bit of insomnia tonight, I’ve written a few more.

I don’t know why it took me so long to check out Ruby. It’s fun! Maybe Python will be, too… (Yeah, yeah, I’m an old stodgy Node.js/Java/Perl guy, but at least I try, hehe!)

Update: Of course, I got code-reviewed down to:

Related:
New! I'll be releasing a Markdown/source-related plugin soon. ...
#Ruby is like #Perl and #bash had a baby ...
Dir.glob, I need you after all. Come back! ...
Merry Christmas! New Paginate::Content for #Jekyll! ...
New: The #Jekyll StickyPosts plugin moves/pins posts tagged "sticky: ...
New: The #Jekyll Tweetsert Plugin pulls tweets from Twitter ...
Using my patched paginator